Tyler Quaill – Superstar of the Future 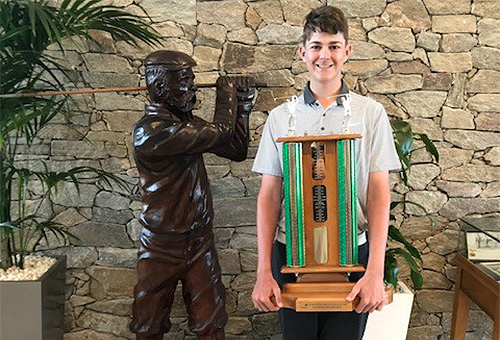 For someone who has just turned 17, young Tyler Quaill has crammed a lot of golf into his short life.

Tyler has represented Australia in the US Kids World Championship at Pinehurst, North Carolina, on four separate occasions – beginning in 2011 when he was only seven – and last year was a part of the Golf Queensland junior high performance squad.

Travelling with him, and supporting him all the way, is the entire Quaill family.

Dad Chris, Tyler’s regular caddie, said the reason was simple – they wanted to give Tyler every opportunity to reach his full potential in golf.

“It’s about setting goals, working hard to achieve them, and knowing you have the support of your family,” Chris said.

“And he’s finding out that you can achieve almost anything if you put in the effort.”

Tyler’s had plenty of expert help along the way.

He’s coached by Grant Field – Cameron Smith’s mentor – whom he first met at a Horton Park junior clinic when Tyler was just six.

And he’s grateful for the support of the Invincibles Sunshine Coast Junior Golf Tour, where he’s been a member for nine years.

“He has the potential to be anything. He’s quiet and unassuming, but he’s always turned up and he’s always been ready to play.”

Indeed, Tyler won the Invincibles’ Quiet Achiever Award last year, and this year received a $1000 scholarship from the Tour, the cash to be used to allow him to attend and compete in an event of his choice.

Tyler, who plays off a handicap of two, won this year’s Maroochy River Junior Open and, less than a month ago, won the club’s Monthly Medal, shooting an outstanding three under-par 69.

Looking ahead, he’s considering applying in 2022 for a scholarship to attend an American college, where the golf programs are exceptional and often act as a pathway to the rich North American golf tours.

His dream is to be a tournament player, but if that doesn’t work out Tyler’s career options include graphic design, architecture and engineering – all feasible possibilities for the St John’s College student who has always achieved excellent academic results.

“What he ends up doing will be entirely his choice,” said dad Chris.

“He knows he’ll have our support in whatever he does.”